Driven by a deep passion for wine and food, always looking to exceed customers expectations and inspire peers.
GALLERY 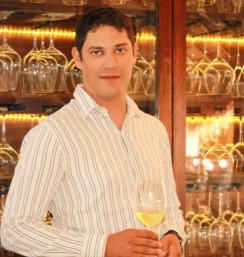 Franco Salzillo
francosalzillo@hotmail.com
Mexico
facebook | twitter
Early in his career in the hospitality industry, Franco became a bartender/mixologist in a well-known Seafood and Steak grill in Playa del Carmen, Mexico. Restless self-training and study allowed him to master century old cocktail recipes, classic drinks from around the world, modern classics and avant-garde molecular mixology.
It wasn't long before his passion for liqueurs and spirits evolved to include the complexity of the wine world and with no time to spare prepared himself for the challenging Court of Master Sommeliers program.
In 2014 Franco obtained the Introductory Certificate from the Court of Master Sommeliers in Las Vegas achieving the top score from more than 100 participants. One year later, also achieved the top score and won the Walter Clore scholarship on the level 2 Certified Sommelier exam.
Franco moved on to La Casa del Agua, iconic fine dining restaurant as Floor Manager and Head Sommelier in charge of a 20+ staff and a wine program of 750 wine labels. His responsibility grew to manage the restaurant operations and service with the highest fine dining standards.
In 2017 Franco was invited to take the role of Co-Wine Director in this year's edition of the Wine & Food Festival Cancun - Riviera Maya, a very prestigious role in a world-class event. Later that year Franco took a step toward specializing in beer in the challenging Cicerone Certification Program.

In 2018 Franco took the opportunity of becoming the Sommelier at the Azul Beach Resort The Fives, managing the wine program for 9 bars and 10 restaurants, three of them, current Wine Spectator Award of Excellence winners, within a Four Diamond service experience and Cristal quality standards.
As one of the few Mexican sommeliers training for the Master Sommelier Diploma, Franco consults beverage programs across the Riviera Maya and complements his passion for food and wine writing for several specialized culinary publications including Residente Magazine.